Fetal Alcohol Spectrum Disorder (FASD) is the term used to describe the lifelong physical and/or neurodevelopmental impairments that can result from alcohol exposure to the fetus during pregnancy.

This project works to prevent FASD in Tasmania through a variety of campaigns and resources, most notably a set of colourful postcards to promote the message that no alcohol during pregnancy is the safest choice. 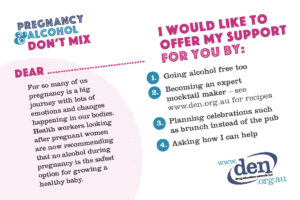 Currently this campaign is being expanded to include messaging that resonates for younger people, including men, women and friends of pregnant mums.  We have undertaken extensive message testing with young people through our connections with local youth services.  The current suite of messages is now being developed into a visual format to carry the message and effectively reach young people in our community.

We will reach the next milestone of this project soon and will be keen for further input from young people about the design, look and feel of this new campaign.

If you or anyone you know is interested in this next stage of the feedback process, get in touch with Maria: maria@den.org.au

In 2017 DEN began a campaign to raise awareness of FASD and to share the unequivocal message that no alcohol in pregnancy is the safest choice. This campaign was supported with the development of a set of colourful postcards featuring local community members to promote this message.  A key focus of this campaign was to engage with dads-to-be and friends, to support pregnant mums to be alcohol-free.